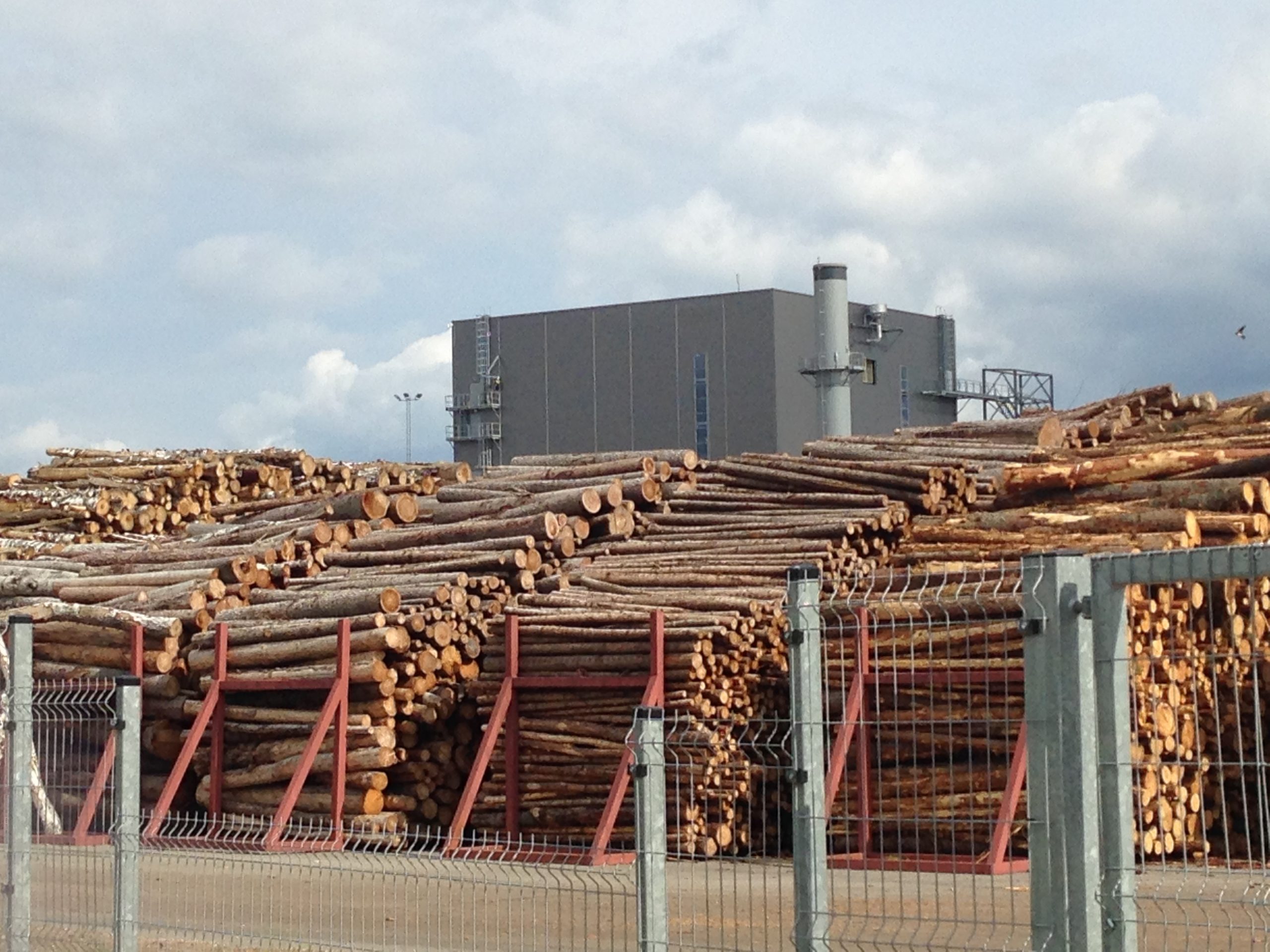 April 5, 2022
Brussels.  A new report from the Forest Defenders Alliance, an international coalition of environmental NGOs, demonstrates that many wood-burning power plants and wood pellet manufacturing plants in the EU appear to be using trees logged directly from forests, despite claims to use sawdust and other mill waste for fuel and feedstock. European Commission scientists have warned that burning trees for energy undermines both the EU’s climate and nature restoration goals.

The report includes photos of more than 40 biomass and pellet plants across Europe that appear to be utilizing tree trunks (stemwood) for fuel and feedstock. Report photos were sourced from a variety of publicly available information and on-site photographs, including Google Maps/Earth satellite view, Google Street-view function, images and videos from companies’ own websites, and on-site photographs.

The report compares evidence for use of logs with company website statements about the type of wood they utilize, finding that about a quarter of the companies make misleading claims, usually that they utilize sawdust and other mill residues, with no mention of stemwood.

The report also examines company claims about climate impacts of burning forest wood. Despite unequivocal statements by the Intergovernmental Panel on Climate Change and leading scientists that forest biomass should not be assumed to be “carbon neutral” or beneficial to the climate, 25 of the companies – more than half – make misleading claims of this nature, in direct contradiction of accepted science. The claims often rise to a level that seemingly should trigger scrutiny under the EU’s consumer protection laws.

“There’s one word for the biomass industry’s sustainability claims: ‘fiction,’” said Luke Chamberlain, EU Policy Director for the Partnership for Policy Integrity. “If these snapshots can capture so many instances of the biomass industry using trees rather than mill wastes, the environmental damage from the entire industry is far worse than previously understood.”

The report comes as EU leaders, including Vice President Frans Timmermans of the European Commission, are expressing alarm about the amount of trees being burned for energy, and pledging to reform biomass policy.

Fenna Swart of the Dutch NGO Clean Air Committee, observes, “Mr. Timmermans clearly wants to reduce the number of trees burned for energy, but doesn’t understand that mill residues can’t meet even current demand.  This report shows how common tree-burning already is, and how important it is that the EU stop counting forest burning toward renewable energy targets.”

A 2021 report by the European Commission’s Joint Research Centre identified burning trees and the larger wood chunks left over after logging as a “lose-lose” scenario for nature and the climate.  Overall, the EU’s wood burning emits over 311 million tonnes of CO2 per year, similar to reported greenhouse gas emissions from Spain. Despite these emissions, EU policy treats burning wood as having zero carbon pollution and allows member states to subsidize wood burning. Subsidies for all biomass use, including wood-burning, are around €17 billion euro per year.

Members of the Forest Defenders Alliance issued the following statements on the report:

Sweden: “What we see in these photos is what the biomass industry and EU policy calls ‘residues’ – old trees, dead wood, deciduous trees – much of it sourced from irreplaceable of old-growth forests,” said Lina Burnelius, Project Leader at Skydda Skogen in Sweden. “This is all carbon that was locked out of the atmosphere but will now literally go up in smoke in the name of ‘fossil free’ energy. To make matter worse forests aren’t just burned as fuel they’re are also replaced with climate- and environmental harmful plantations, the opposite of a our must needed climate-heros: forest ecosystems”

Germany: “The world’s largest pellet companies see Germany as their next big market. This would be a disaster for forests and the climate,” said Jana Ballanthien, Forest Campaigner, ROBIN WOOD. “The German government must rapidly enact to stop subsidies for burning wood. Germany must set a good example and be a strong voice against the burning of wood in European climate policy. Burning our forests is not renewable!”

Portugal: “The classification of forest biomass as renewable energy is promoting the burning of trees at a time when we should be urgently protecting forests and reducing carbon emissions,” said Nuno Forner, Policy Officer at Zero (Portugal). “Instead of real forestry waste, wood is being burnt inefficiently, contributing to unsustainable forest management.”

Estonia: “Estonia’s forests were under heavy logging pressure already before the war in Ukraine, but now we see the timber industry taking unscrupulous advantage of the situation,” said Liina Steinberg of Save Estonia’s Forests. “We’re running out of forests, and the clearcut-prone state forest managers are cutting down forests close to villages and towns which are very important for local people and visitors to our country.”

Italy: “European citizens pay billions of euros for so-called green energy that harms forests and the climate. This is nothing but greenwashing,” said Gaia Angelini, Green Impact, Italy. “Forests are our future, they must be conserved for the common good and to minimize climate impacts and preserve biodiversity.”

Finland: “We need protect Finnish forests, not burn them for energy” said Sommer Ackerman, an activist with Europe Beyond Burning, a campaign of Fridays For Future.  “The EU needs to drastically lower their emissions which means that they must stop with their false solutions. We must listen to the science, stop subsidizing the burning of biomass and instead fund true renewables.“

Photo assets from the report, sorted by country, are available at https://forestdefenders.eu/biomass-photos/

Quotes from scientists about the report

“I can no longer hear the assertion that in biomass power plants mainly sawmill residues (pressed into pellets) are burned. The pellet industry is still unabashedly selling its founding myth, but in the meantime entire forests are falling victim to these factories’ hunger for wood. This is unacceptable for climate and species protection reasons. And a second assertion needs to be debunked: pellets are not displacing coal and oil, but are slowing down photovoltaics and wind energy. Therefore, the burning of wood should be stopped as soon as possible.”

“Entire forests are burnt every day in the wood-fired power plants. The tree trunks removed from the ecosystem are missing as a resource and habitat for forest species, as microclimatically effective structures and for soil formation. Their removal often leads to forest ecosystems becoming even more vulnerable to climate change. Timber harvesting is associated with carbon losses that have not yet been adequately taken into account. In the worst case, the weakening of forests in combination with rapidly advancing climate change means that the carbon removed is not sequestered back into the ecosystem. The massive use of wood turns stores and sinks into a source of greenhouse gases.”

“The pictures clearly show that these plants do not only use residues and waste wood but large numbers of whole tree logs. If we take climate change seriously and really want to do something about it, we have to stop burning trees. Trees are carbon sinks if we let them grow. But if we cut them down and burn them, they become carbon sources and it will take decades or even centuries to sequester the same amount of carbon again. A green deal that doesn’t stop but actively supports this, is not part of the solution but another part of the problem.”